WATCH THE DOCUMENTARY
Therapy or Torture?
The Truth about Electroshock

In this gripping exposé, the $5.4 billion ECT business, its history, practitioners and devastating results are revealed in graphic detail.

LEARN THE TRUTH
RAISE YOUR VOICE 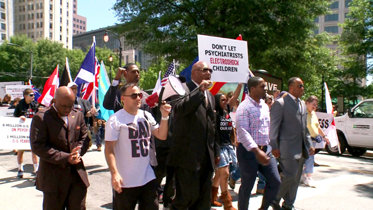 Every Person’s Voice Counts and Will Make a Difference

There are many ways you can join in the fight to end the abuse of electroshock. From social media to marches, petition drives and letters to your local congress—here’s what you can do.

GET INVOLVED!
REPORT ABUSE
Protect Yourself Against Psychiatric Abuse

If you learn of any adverse after-effects from ECT, report it to your national regulatory agency. You can also make a confidential report to CCHR.

SEND A REPORT
“One fact about ECT: It damages the brain. Period.... ECT should have been banned 50 years ago.”
—Dr. Norman Shealy, Neurosurgeon
WHAT IS ECT?

Electroconvulsive therapy, or ECT, is a procedure used by some psychiatrists. Up to 460 volts of electricity are sent coursing through the brain. Why? To produce a grand mal seizure they claim will “reset” or “reboot” the brain.

This theory has never been proven. In fact, there is considerable evidence that ECT causes significant and irreversible brain damage.

The human brain is a highly intricate organ, controlling the body with more than five trillion signals every second. It performs that feat with nearly eight times less than the power of a watch battery. But one ECT session assaults the brain with 2,300 times more electricity than it needs to function, leading to severe trauma.

THE TRUTH ABOUT ELECTROSHOCK

DOWNLOAD FREE
HOW MANY ELEVATORS CAN BE POWERED WITH THE ELECTRICITY FROM ONE ECT SESSION? WATCH THE DOCUMENTARY.
TWEET THIS

ELECTROCONVULSIVE THERAPY’S DEATH RATE IS 50 TIMES HIGHER THAN THE US MURDER RATE. THAT SHOULD SHOCK EVERYBODY.

If that number bothers you, contact us to learn more. If it doesn’t, you must be a psychiatrist.

WHAT YOU CAN DO
Now that you got educated, get involved.

Right now, the most vulnerable among us, our children, are in the cross hairs.

There are steps we can take. Six to be exact.

If you learn of any adverse after-effects from ECT, make sure it’s reported to your national regulatory agency.

You have the right not to remain silent.