Nestled in the Italian Alps, Trento is a postcard-beautiful city. Below that exterior, however, a psychiatric system had been undermining the family unit—the fundamental on which children depend—with large numbers of children involuntarily taken from their parents.

CCHR Italy teamed up with attorney Francesco Miraglia, who successfully litigated cases that resulted in abducted children being returned to their families.

Of those ripped from their homes, 96 percent were reportedly removed based on false or absurd allegations by psychiatrists. The high percentage was traced back to a Social Services modus operandi that focused on parents and children amid a personal or familial crisis. After psychiatric evaluations are done, it is concluded that the parents are unfit or that the child is “at risk.” In either case, the child gets taken away and sent to a soulless state-run foster home.

To address the problem, the staff of CCHR Italy teamed up with attorney Francesco Miraglia, a specialist in domestic and juvenile law. Miraglia said, “I was a rebellious child who didn’t accept orders and created turmoil. I realized that this behavior is now considered a ‘disease’ that could lead to psychiatric drugs and even to the removal of children from their parents. After seeing the suffering of the parents, I had to do something.”

Miraglia found a clique of lawyers at work with psychiatrists and psychologists, monopolizing these Social Services cases. “It got to the point that I knew what was written in the reports even before reading them, as it seemed to be a ‘copy and paste’ from one case to another,” Miraglia said.

Working with CCHR, Miraglia took on his first case: a mother whose 7-year-old daughter had been taken by Social Services on trumped-up charges. Once out of her mother’s arms, the girl was drugged and damaged. Miraglia took the matter to a Trento City Court judge who, after hearing the evidence, ordered the child to be taken off the drugs and returned to her mother,
a precedent-setting win.

From there Miraglia tackled other cases, including a boy taken from his mother because she was “too loving.” Miraglia won that case and others, with the children returned home.

While individual cases of injustice were being addressed, CCHR went to work to handle the bigger picture. This included support of a legislative initiative to stop abductions based on false psychiatric diagnoses. CCHR launched a petition-signing campaign, set up and manned information booths, and staged marches and demonstrations, including protests outside the City Council and the Trento Juvenile Court. A councilwoman, after hearing firsthand horror stories of families losing children, went to work to end the abductions. She introduced Trento City Resolution 196, stating that families are the building block of life and should be assisted in providing the best care for their children, instead of children being removed from them.

News spread throughout the region about the exhibits, protests, events and cases won, with such messages as “Control is Needed on Social Services” airing to a total of 7.6 million viewers.

And with Miraglia winning case after case, the passage of Resolution 196, and concerted actions by CCHR, the number of Trento’s children removed from their parents has been falling dramatically—down by 29 percent at last count.

A Psychiatric Diagnosis Abuse Report Form has been made available at CCHR.org for your use. If you or someone you know is a victim of psychiatric abuse, fill the form out and provide it to your legal representative to take further action.

Anyone diagnosed with a psychiatric (mental) disorder has the right to informed consent before any treatment is undertaken. Unlike diagnoses for medical conditions, psychiatrists do not have blood tests or any other biological tests to ascertain the presence or absence of a “mental illness.” It is important to know that, as one state government medical manual says, “Mental health professionals working within a mental health system have a professional and a legal obligation to recognize the presence of physical disease in their patients and to rule out any physical condition causing a patient’s mental disorder.”

Psychiatrists rarely conduct thorough physical examinations to rule out medical conditions, thereby misdiagnosing the patient. This can result in inappropriate and dangerous treatment, added to the fact that the real underlying medical condition is left untreated.

Further, if a psychiatrist asserts that your mental condition is caused by a “chemical imbalance” in the brain or is a neurological disorder, you have the right to ask for the lab test or other test to prove the accuracy of the diagnosis. Go to www.cchr.org/take-action/psychiatric-abuse-report-form.html to report abuses in the field of mental health.

As a nonprofit mental health watchdog, CCHR relies on memberships and donations to carry out its mission to eradicate psychiatric violations of human rights and clean up the field of mental health. To become part of the world’s largest movement for mental health reform, join the group that has helped enact more than 170 laws protecting citizens from abusive mental health practices.

PSYCHIATRY: AN INDUSTRY OF DEATH DVD 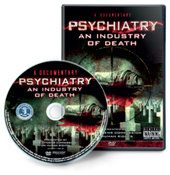 The DVD lays out the history of psychiatry from its macabre 18th-century origins to today, where 100,000 patients die each year in psychiatric institutions and 20 million children have been put on potentially lethal, mind-altering drugs.